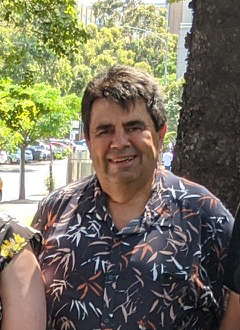 Hi, I’m Michael Bell (AKA; Mookeye) from Heywood in South West Victoria on Gunditjmara Country. I’m a Gunditjmara man and have lived most of my life in Heywood with my wife Sandra (a Yorta Yorta Women) and our two son’s Billy (31) and Micko (28). Billy’s partner Lisa has two sons (Tyler & Bailey) and along with our grandson Archie.

I’m currently employed with RMIT as the Rethinking Criminal Record Checks (RCRC) Project – Aboriginal Community Engagement Worker since February 2020. My role is to support the Aboriginal Engagement for the project.

A significant part of this work has been associated with the Winda-Mara Aboriginal Corporation (WMAC) based in Heywood. I was the first Chair of the organisation and just recently completed 10 years as the CEO. This experience has seen our organisation become sustainable in managing an Aboriginal Community Controlled Organisation. My time at WMAC is a demonstration of Self-Determination, Aboriginal Leadership and a continuation of Aboriginal Culture

I later become the Executive Officer for the RAJAC for a five-year period in the BSW and in December 2019 I received the Dr Alf Bamblett Memorial Award for Aboriginal Justice for my work in Justice. This work had provided me an understanding on the overrepresentation of Aboriginal people in the Criminal Justice System.

In 2019, I attended the Koori County Court Training to become an Elder for the court in Warrnambool. I’ve been a Magistrate Koori Court Elder for over five years and have only sat a few times due to my role at the time as being the CEO of Winda-Mara. In my role as a RAJAC Chair I advocated to establish a Koori Court in Warrnambool Magistrate Court, as the court system needed to strengthen its cultural diversity to improve justice outcomes for Kooris.

I was the convenor for the Woor-Dungin Criminal Records Discrimination Project (CRDP), that seen the creation of a submission for Spent Conviction Legislation and changes to the Equal Opportunity Act to the Victorian Government. This experience provided me an insight in how to lobby for change in the government.

In regards to the Rethinking Criminal Records Checks Project, I believe this is an opportunity to investigate on how an old system is impacting on our community and create better pathways for people completing their convictions.

Our family is connected to the local footy club, our two boys play footy and my wife and my son’s partner both play netball. I’m on the footy committee along with the cricket committee as one of our boys still plays cricket (club secretary), I enjoyed playing both cricket and footy until my late 40’s.

Both my wife and I enjoy walking and in the South West around Portland we have plenty of beaches to walk on. In 2019, the Gunditjmara country were acknowledged by UNESCO as an inscribed World Heritage Area. As a descendent I with others from our community access the country and continually maintain our cultural practices.