The CIJ offers a range of taster placements to RMIT Law students to give them experiences of the legal and justice system that complement their studies. 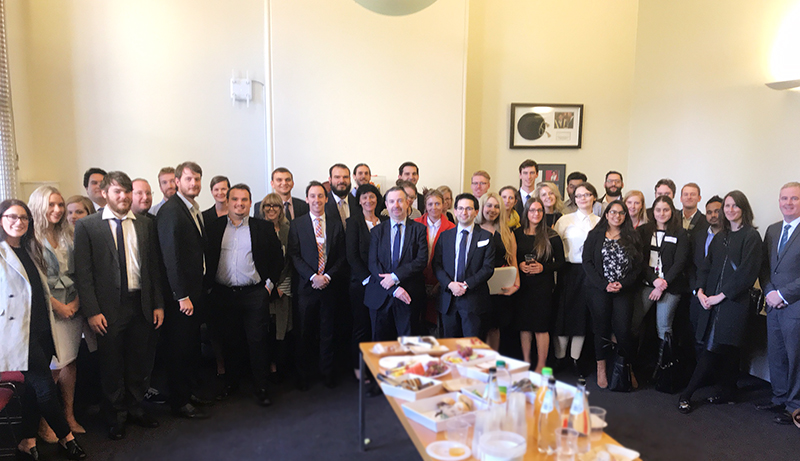 Students at Court of Appeal lunch

The CIJ offers a range of taster placements to RMIT Law students to give them experiences of the legal and justice system that complement their studies. In Semester 1 we had 19 students doing placements at the Court of Appeal and the Fair Work Commission. Here are some of their reflections:

This opportunity enabled me to see how concepts I am learning are used in practice, giving even the driest topics a sense of urgency. The United Firefighters’ Union and the Victorian Equal Opportunity and Human Rights Commission argued over the meaning of a provision of the Equal Opportunity Act 2010 (Vic) for six hours, giving light to my understanding of statutory interpretation.

Seeing sentencing reasons withheld from the public in a criminal appeal gave weight to the proceedings on the second day. This captured the value of the undertaking, contrasting the professional work of the barristers and the presence of an offender’s family crying near the dock. Reading textbooks and cases can make criminal matters feel very impersonal. Here, we saw that not only the parties themselves but the judges who will decide whether something is ‘manifestly inadequate’ are human.

On the third day, Bauer Media v Wilson brought a celebrity and plenty of media into the court. But I was most enraptured by Bauer’s senior counsel, and his interplay with Justices Tate, Beach and Ashley. I was drawn into his arguments and found the ability of the judges to question him with such sharpness and fluency to be magnetising.  It was certainly the day I found myself with the most questions.

The opportunity to see three distinct cases made the experience particularly enjoyable and beneficial. The hearings related directly to subjects we were undertaking at the time, with statutory interpretation being a central focus of our first day hearing, sentencing in a criminal trial the next, and a very high-profile defamation case on the last. I was able to immediately use what I learnt from the trials to inform my approach to my assessments.

You can’t help but feel impressed, and perhaps somewhat daunted, at the expertise, court skill and acquired knowledge of the judicial officers. The opportunity to meet with the associates, lawyers and barristers and hear from the judges working in this quite technical court was both an exciting and learning experience. This placement also provided insight to help guide where I would like to take my legal studies, and some significant inspiration of what it takes to forge a successful and meaningful career in the law.

With multiple judges sitting for appeals, it became intriguing to see how each judge responded differently as they worked to understand the relevant facts and the parties’ main arguments. Whilst some judges would press counsel very actively, others would be more passive in their approach. Judges also relied on counsel to assist them in the process and to see the high-level barristers, Queen’s and Senior Counsels at work was also a definite privilege.

All three days sitting observing the cases in court as well as the first day where we were privileged enough to hear from the court professionals allowed me to learn so much about what happens in the court beyond just the cases, and allowed to learn so much about the Supreme Court library and the tremendous history behind the iconic building. It provided me with a sense of serenity and a feeling of great motivation and willingness to pursue law because it made me feel like this was where I would want to be in the future. Being able to eventually use these books and sitting in the Supreme Court library analysing case files and doing my own research for my own cases is something that I have always wanted to do and the tour in the library and the insight I gained from the staff and registrars at the Court allowed to get one step closer to achieving what I want from my law degree. 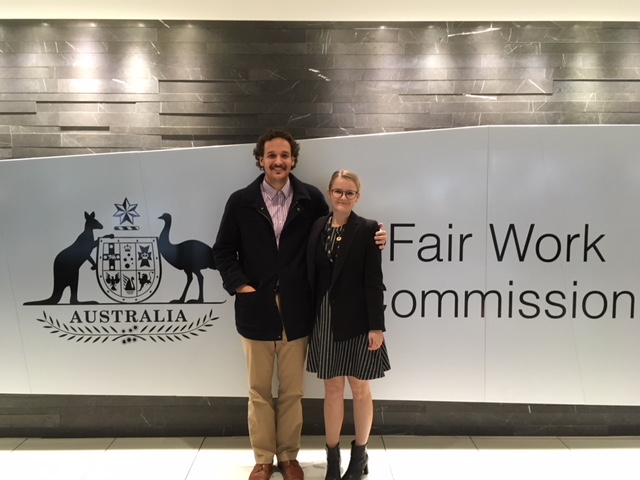 Spending a week at the Fair Work Commission proved to be an experience that was both personally and professionally fulfilling. As an OUA student, a large slice of my time is spent wondering how the skills I learn at home in front of my computer will transfer to the real world. Without the sounding board of other students and professionals, it can be difficult to gauge how the theory will translate to practice.

This placement showed me how the concepts discussed in textbooks come to life in the real world, and how real people’s lives are affected, sometimes drastically, by the legal system we study.

Of particular interest was the implementation of dispute resolution practices by the Fair Work Commission. Eighty per cent of unfair dismissal applications are resolved at this stage, and are not brought before a member of the commission. Watching a seasoned practitioner implement the techniques discussed in Negotiation and Dispute Resolution was incredibly valuable.

The highlight for me was getting the chance to review the materials of an unfair dismissal application, and talk through with a Commissioner the likely arguments each party would be advancing. I was then able to go to the hearing and watch as the predictions of the Commissioner played out in front of me. Following this, I debriefed with the Commissioner again. This had the interesting effect of humanising the legal process even further.

Having seen the work of Members’ associates, I have taken a keen interest in potentially veering my career towards this kind of work; something that I did not know was available before this placement.