The CIJ is thrilled to be able to release research it conducted to support implementation of Recommendation 77 of the Royal Commission into Family Violence – More than just a piece of paper. Getting protection orders made in a safe and supported way. 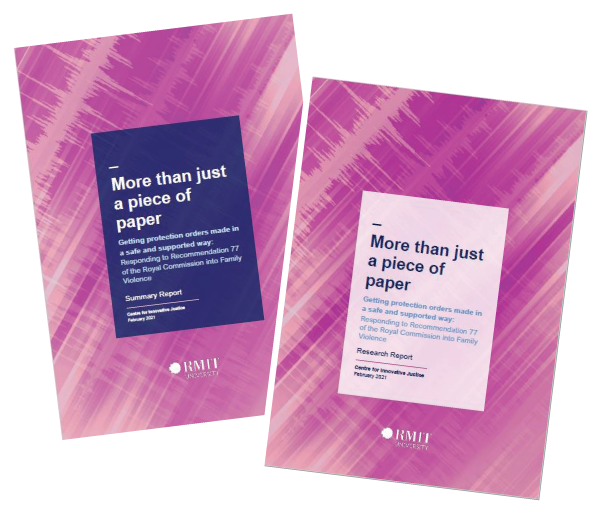 This research is being published after a dramatic adaptation of Victoria’s civil legal response to family violence. Delivered to government in July 2019, the findings and recommendations in this report were still being considered at the onset of the COVID-19 pandemic, when courts and legal services were suddenly required to shift to conducting urgent matters online.

It is important to understand, therefore, that the findings and recommendations in this report were developed in the ‘pre-COVID’ environment – one where the majority of interactions and decisions occurred in a face to face setting, which the Royal Commission into Family Violence (RCFV) described in great detail and to powerful effect. This context was one in which access to services often depended on parties being present at court, but where the ‘churn’ of activity on the day made the experience overwhelming and difficult to understand. The potential for an Affected Family Member (AFM) to be in close proximity to a respondent also kept many victim/survivors away; while long delays, crowded corridors and transactional exchanges did little to dispel the perception of many respondents that the process was unfair.

Three years on from the release of the RCFV’s extensive recommendations, our research found Victorian courts and associated services still toiling valiantly to respond to huge caseloads, while simultaneously adapting to wide-ranging reforms. Accordingly, the CIJ proposed a path for giving better and more meaningful effect to the legislative context in which this was occurring, while also bringing more nuance into the process – in many cases, slowing things down. This was so that a Family Violence Intervention Order (FVIO) became more than ‘just a piece of paper’; and so that parties had access to legal advice and support prior to coming to court and therefore understood what had actually occurred.

Fast forward 18 months and the extent of change required to keep the FVIO process operating has been breathtaking. The speed at which Victoria’s FVIO system moved to online operation was both commendable and previously unthinkable for many of those familiar with the complex considerations involved – a move seen by many as paying great dividends for all involved.

This is because remote working can mitigate many of the challenges associated with physically attending court, such as going through security, as well as sitting in chaotic and crowded waiting areas which can trigger trauma and anxiety. It can also reduce the fear of being in physical proximity with someone who has perpetrated violence; as well as remove barriers for people who do not have the resources for childcare or for travel, especially for those in regional areas. Anecdotal reports shared with the CIJ by the end of 2020 therefore suggested that ‘attendance’ or engagement had increased in certain contexts.

Without the court functioning as a physical place in which parties and practitioners congregate and interact, registry legal and support services also began to contact parties prior to hearings. This often entailed multiple phone calls or messages in order to gain instructions or provide advice or support. The effort behind the scenes involved a great deal more coordination than the system-driven procedures of the physical environment but, in many cases, meant that parties had the opportunity to process and absorb information in ways they would not have done before.

The lessons from this shift have yet to be fully documented, although are beginning to be captured in the context of other ongoing evaluations and research. Just as all Victorians have had mixed experiences of the shift to interacting online, however, we should not assume that all the changes have been felt as positive by those who interact with our courts.

We know, for example, that privacy and safety are essential to consider in each individual case. The dangers of remote engagement for victim/survivors of family violence, in particular, are considerable where this does not occur with support services available and where the court cannot be confident that the perpetrator of that violence is not actually present in the same room. Similarly, we know that a respondent’s resentment at a court outcome – particularly where the exchange has been experienced as transactional or unfair – could potentially be meted out on those around them.

Just as relevantly, we know that the challenges of understanding legal terminology or processes can be mitigated by a client’s close proximity to their lawyer, particularly for a client who is from a linguistically diverse background, has low literacy or a cognitive impairment. Equally, the experience of a court hearing can be highly re-traumatising, regardless of whether it occurs remotely or in person. The support that people often need in these circumstances is not something which is easily replicated online.

As we continue to transition to a ‘COVID normal’ way of working, therefore, courts have the opportunity to explore the lessons of the last 12 months, apply the benefits, but discard those aspects which did not prove useful or safe.

One of those benefits foreshadowed by the CIJ’s recommendations here is the level of pre-court engagement which legal services and Victoria Police began to conduct with parties. The remote service environment has seen Victoria Legal Aid, Community Legal Centres and Victoria Police attempting to provide parties with more information and an opportunity to ask question ahead of time, when things are less stressful and when information is more likely to be absorbed. Doing so has come at a considerable and commendable effort from all involved, however, and will not necessarily be sustainable once the full extent of court processes resume.

Just as importantly, the CIJ’s recommendations for greater emphasis on procedural justice have implications for how the experience of remote service delivery is harnessed into the future. Prior evidence establishes, and this research confirmed, that the way in which a court process is experienced, and an outcome reached, is central to the effectiveness of that outcome. This means that people who are respondents to FVIOs are more likely to follow those orders if they feel that they have been treated with fairness and respect. By contrast, if a respondent feels that ‘the system is against me’ – as did many respondents interviewed for this research – they are more likely to disregard the order or, just as dangerously, leverage the mechanisms of that system against a victim/survivor.

The way in which all actors in the legal system interact with parties to FVIOs therefore has implications for these orders’ success. What we found in this research was that system activity does not equate with system effectiveness – that safety comes just as much from the expertise, reliability and consistency of risk management, enforcement and access to supports which surround an FVIO process than it does from the act of simply ‘getting the order in place’.

That means that simple access to the legal system – whether physically or remotely – is only one step in a complicated equation which those working in the FVIO system try to solve day by day. If the lessons from the remote service delivery revolution are to be harnessed to useful effect, therefore, it will be crucial to understand what works for whom and in what circumstances, all while keeping the benefits of access to the physical court environment firmly in mind.

To complicate things further, this will need to occur against a backdrop of increased demand from a shadow pandemic of family violence; significant court backlogs; and more pressure on the public purse than ever before. This was flagged just this week in the media, in which lawyers who acted for respondents expressed concern about their clients grappling with extended timeframes under interim FVIOs to which they had consented. The potential for greater resentment from respondents and the risk that this poses to victim/survivors is something which must be addressed.

Courts will therefore need greater support – and an evidence base – if the objectives of the FVIO system are to continue to be realised. This means that the CIJ’s call for a system re-set still rings true and is perhaps even more relevant than it was prior to the pandemic. With all the lessons from the last 12 months incorporated, we need to ensure that the FVIO system works at every point towards safety, accountability and the supporting legislation’s original intent.

Research Report – More than just a piece of paper: Getting protection orders made in a safe and supported way: Responding to Recommendation 77 of the Royal Commission into Family Violence

Summary Report – More than just a piece of paper: Getting protection orders made in a safe and supported way: Responding to Recommendation 77 of the Royal Commission into Family Violence

This project looks at improving the process which occurs when parties negotiate and agree to the conditions of a Family Violence Intervention Order before it is formally ordered by a court.