Reversing the trend of mass incarceration – do prisons have a role?

Some simple steps to start turning the tide on Victoria's prison population. 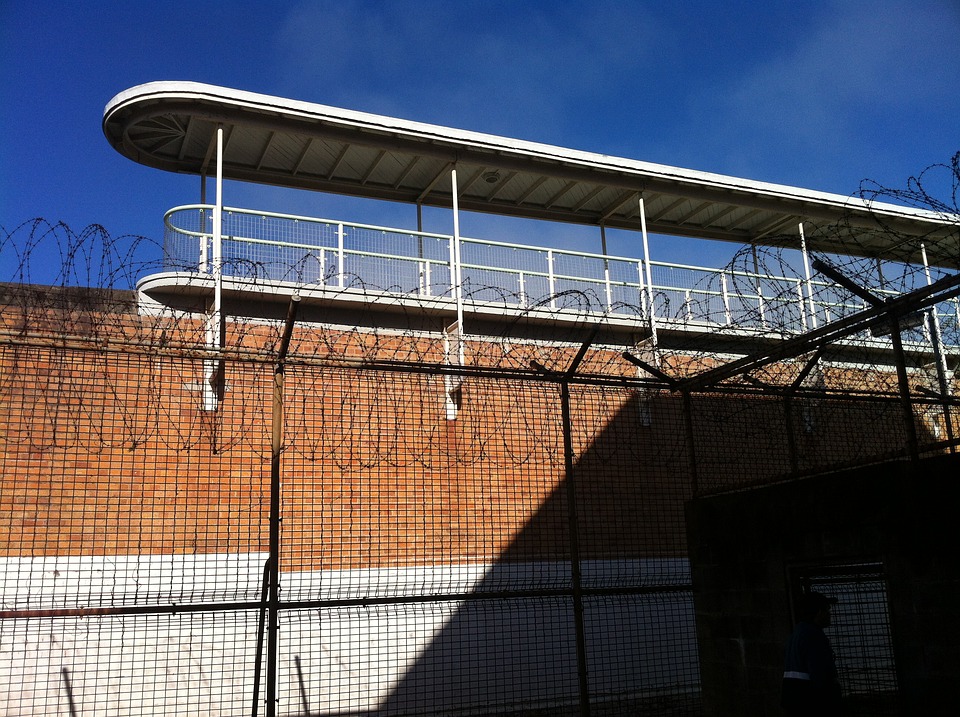 In recent years, Victoria’s prison population has steadily increased and has now reached historic highs. By contrast, the crime rate has fallen for the past three years. That the prison population could grow while the crime rate falls has much to do with record investment in police numbers, legislative reforms of bail and parole, and a narrowing of non-custodial sentencing options for courts. The growth in corrections spending now outstrips almost every other area of service delivery in Victoria, and while we continue to announce and build new prisons, existing ones are at or near capacity.

This is not a desirable state of affairs: not only is it extraordinarily costly for our community, but we are also failing to effectively rehabilitate prisoners – almost one in two Victorian prisoners return to jail within two years of their release.  This is making us less safe as a community, as prison is criminogenic, and prisoners are not meaningfully supported to break cycles of offending, or to transition from prison and reintegrate into the community post-release.

So, what can be done to start to reverse these trends? Do prisons themselves have a role?

While the problem can sometimes seem insurmountable, there are some very simple legislative and operational changes that could provide corrections with a more purposeful approach. These ideas are by no-means intended as a comprehensive response to a complex challenge, just three simple examples of what could be done relatively easily within the context of corrections in the short term in Victoria.

Usually, prisons are seen as having four main purposes:

However, some members of the community consider prisons solely as places for punishment, rather than imprisonment itself being the punishment. While some believe incapacitation, containment and community safety are the only purposes of incarceration, the reality is that prisons are populated by a range of offenders, many who are themselves victims and extremely vulnerable. Only a small proportion of these offenders would pose a risk to the community if they were not incarcerated.

Within prisons themselves, safety and security are seen to be the most important objectives. If there’s a conflict between maintaining the security and good order of the prison and the delivery of rehabilitation programs to prisoners, the former will take priority. The approach to the administration of Community Corrections Orders (CCOs) tends to follow a similar pattern, where the focus is on monitoring offenders for compliance rather than proactively supporting them towards successful completion of orders. Programs that prepare prisoners for parole are rationed to ‘high risk’ and ‘dangerous’ offenders, and, rather than beginning the work towards making prisoners more prepared for release in the community as soon as the sentence starts, access to these programs, if available at all, is restricted until a sentence has almost been completed.

At a macro level, the lion’s share of available resources flow in the direction of containment and incapacitation. We spend far more public money on servicing demand for prison beds than we do on rehabilitation and reintegration in the community. The unsurprising result is that our prison system produces poor outcomes, even when compared with international and national benchmarks.

As the Victorian Ombudsman has observed, there are many reasons people reoffend and return to prison, but it is evident that insufficient access to rehabilitation and reintegration programs has a significant bearing on the likelihood of returning.  Until there is clearer signalling about the purpose of prisons and corrections, it is unlikely that these issues will be resolved, and our system will continue to perform poorly at achieving rehabilitation and reducing recidivism.

The Corrections Act 1986 has three purposes, defined in section 1: 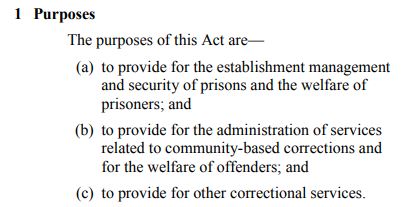 Remarkably, the Act’s stated purposes do not include the rehabilitation of prisoners or the reduction of recidivism. Both of these should be included in the Corrections Act’s legislated purposes. They are far too important to be left to policy and administrative guidance. Compared with other states, Victoria’s model for providing a legislative context for rehabilitation programs has been described as ‘virtually non-existent’. In the ACT, for example, there is a specific legislative mandate for rehabilitation programs. To drive reform in Victoria, rehabilitation and the reduction of recidivism should be described as the primary purposes of the Act. This would bring about change because it would:

If these changes were made, Corrections Victoria would no longer be an arm of government primarily focussed on overseeing the incarceration of prisoners: it might instead be more appropriate to reflect its focus by renaming the agency “Rehabilitation and Reintegration Victoria”. As we have argued elsewhere, another means of driving the focus on rehabilitation would be to use the implementation of OPCAT, which will require the preventative monitoring of places of detention in Victoria. This monitoring should include the extent to which rehabilitation programs are accessible to prisoners.

Community Custodial Permits are provided for by the Corrections Act 1986, section 57B: 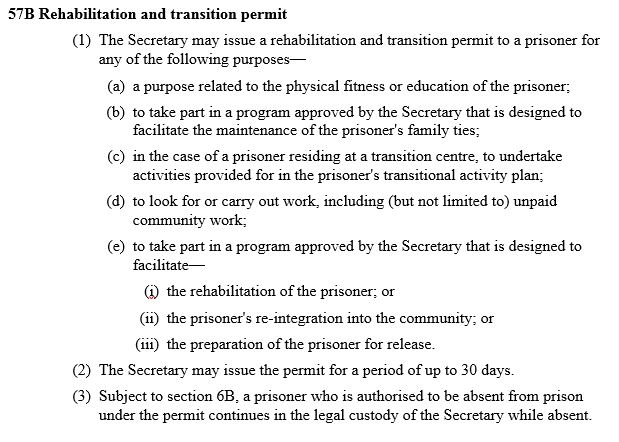 This section of the Act is the legislative basis for programs that enable prisoners to leave prison for short periods of time to engage in activities such as restoring civic buildings, revegetating land, helping mend farm fences, obtaining identity documents or playing in the local football league.

Many prisoners are serving short sentences without access to rehabilitative programs, either in prison or on parole. This is partly because of the growth in the number of prisoners who are on remand: remandees are not able to access these programs, and are often released back into the community without support, having already served their sentences while on remand. When rehabilitation programs have not been completed, this creates challenges associated with planning for release and the shift from prison to the community.

Consideration should be given to extending the duration of Community Custodial Permits beyond 30 days, and facilitating greater use of these permits. While the idea that prisoners should be spending time participating in community activities appeared to come as a shock to some, and as a result programs based on these permits have come under intense scrutiny, greater use of these permits would be beneficial, enabling more prisoners to spend more time in the community, to participate in a broader range of community-based rehabilitation programs, and to more effectively prepare for re-integration and release.

This is particularly important when prison-based program delivery faces challenges and limitations, and there are some activities which are central to rehabilitation and reintegration that simply cannot be undertaken behind the prison walls. For example it is impossible to establish and maintain outside employment while incarcerated; many educational courses are delivered online, but prisoners are prohibited from using the internet.

Community Custodial Permits could also facilitate continuity of engagement by prisoners with programs they first access in custody. Many programs begin the process of addressing rehabilitation and reintegration challenges for prisoners in custody, but can also maintain that support to prisoners once they are in the community. An example of this is the Mental Health Legal Centre’s Inside Access program, which delivers legal assistance, financial counselling and social work support to women prisoners to help them address issues that create barriers to rehabilitation and reintegration. These include debt, housing, Centrelink, children and family related issues. Inside Access continues this support for ex-offenders in the community post-release.

At one tenth of the cost of jailing offenders, Community Corrections Orders (CCOs) are cheaper to deliver and result in far less recidivism than prison sentences, as new research from the University of Queensland has shown. However, the proportion of CCOs that are not completed remains very high at about 40 per cent.

Community Correctional Services (CCS) has the capacity to influence the successful completion of these orders in almost every case. Corrections workers can determine whether a CCO is an appropriate sentencing option through suitability assessments provided to courts. They can identify the kinds of conditions likely to most effectively address the underlying causes of offending, and they can improve rates of compliance through their approach to the management of offenders while they are completing orders and the way in which they exercise their discretion in responding to the performance of a person on a CCO.

In fact, the effective management of community-based sentences is a critical factor in addressing the performance of our system as a whole. There would be very few prisoners in Victoria who have not been on a CCO before going to jail. This means that Corrections Victoria has the opportunity to intervene in this trajectory, ensuring that CCOs are not merely a rung in the sentencing ladder that leads inevitably to the prison gate. Instead, this branch of corrections must ensure that a greater proportion of those who receive community sentences do not become future prisoners. To intervene effectively, corrections workers need to better assess suitability, understand why an offender may not have complied with an order, and to find better ways of supporting offenders to successfully complete their CCO.

Repeated breaches of CCOs result in sentences of imprisonment because prison then becomes the only other sentencing option available. Such breaches can be characterised as systemic failures rather than failures on the part of individual offenders. They may relate to the complexity of the issues faced by the offender (such as housing or mental health issues) and the lack of support available to address these. They may also relate to the extent to which corrections is effectively supporting offenders to complete these orders. But as the same research from the University of Queensland has shown, there is a lack of data and evidence on why people fail to complete or successfully complete their CCOs.

The rate of completion could be improved through a new and enhanced case management support function that could provide confidence that CCOs are an effective alternative to those short sentences of imprisonment often imposed by magistrates and judges in circumstances where it is thought that an offender will be ‘set up to fail’ by the imposition of a CCO, because the offender’s complex needs and prior history suggest that they will struggle to complete such an order. In short, community-based sentencing options need to be reinvigorated so that they are an effective and meaningful alternative to imprisonment, rather than a stepping stone to prison.

While there are also strong arguments that abolition is the only answer, for the time being prisons themselves may have a role in reducing over-incarceration. These are just three straight-forward ideas that would help in some small way to turn the tide; they relate only to prisons and corrections, and are not targeted to the needs or experiences of specific populations. There is an urgent need to use targeted responses to address the needs of people with disability and mental illness, Aboriginal Victorians and women. There is growing awareness in other jurisdictions that the imposition of short sentences does far more long-term harm by disrupting connections with support, housing and family than is proportionate to the sentencing purposes for which they are said to have been imposed. There is also much more that can and should be done to prevent people coming into contact with the justice system in the first place. Much of what is needed to respond to this crisis must take place beyond the justice system by addressing access to housing, employment, and disadvantage.  To underpin change, we must overcome the pervasive stigmatisation of former offenders and do far more to demonstrate our willingness to welcome them back into our community. We could start by signalling that this is also what we expect of our justice system.