COVID-19 and incarcerated women: a call to action in two parts – Part One

In this two-part series, we draw on our work with partner agencies and people with experiences of imprisonment to argue for women to be prioritised for bail or early release from Victorian jails. This is in advance of a broader CIJ Discussion Paper regarding the imperative for decarceration of women, to be released towards the middle of the year.

As a signatory to the first Open letter to Australian governments on COVID-19 and the criminal justice system , the CIJ applauds the action of the NSW Parliament which, like governments in Italy, Iran, the US and Turkey, has taken steps to facilitate  the early release of prisoners at heightened risk of the virus.

Part 1 presents a profile of women prisoners and the reasons their circumstances demand special consideration in any response to COVID-19.

Part 2 gives an inside view in how criminalised women are being impacted by the pandemic.  We talk to lawyers at the Law and Advocacy Centre for Women (LACW) about changes needed to ensure the health and human rights of prisoners are protected in the context of COVID-19.

Part 1: The case for the early release of women prisoners

As the Victorian economy goes into freefall, one sector experiencing consistent expansion remains open for business − incarceration. While the wider community is subject to strict social distancing laws, punitive bail and sentencing laws continue to funnel people into prisons which are over-crowded, do not always enable prisoners to take adequate hygiene measures and where access to already over-stretched health services is limited.

Failure to reduce the prison population, a significant proportion of which has heightened vulnerability to COVID-19 due to compromised health, puts the lives of prisoners and frontline corrections staff alike at risk. Given the high rate of ‘churn’ in the system, with large numbers of people with complex health needs entering and leaving prisons each day, it also poses a significant public health risk should an outbreak in prison occur.[1]

Compelling reasons exist for women to be considered a priority for bail or release into the community. Women:

Exponential growth in our prison population has seen Victoria move from having one of the lowest incarceration rates in the world in 1992, to one of the highest, comparable to Zambia, Jamaica and Algeria. Women and remandees feature disproportionately in this increase, with women being imprisoned at a significantly faster rate than that of men. 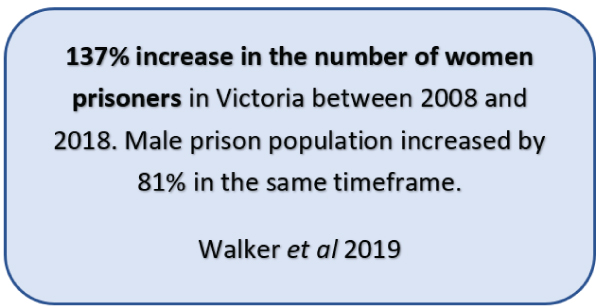 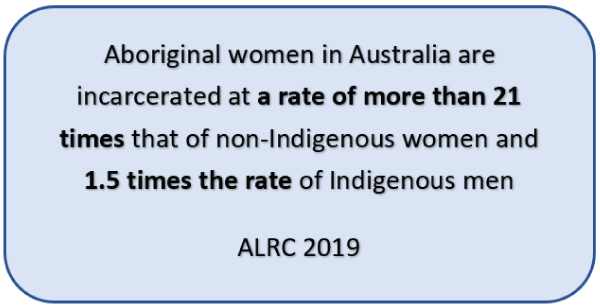 Factors associated with the escalating imprisonment of women, and particularly of Aboriginal women, are numerous, complex and well documented. With Victoria experiencing a relatively flat crime rate over the last decade, researchers point to social and structural drivers, rather than significant increases in the rate or seriousness of women’s offending.

Women prisoners are one of the most vulnerable cohorts in the community, with disproportionate experiences of victimisation from family violence and sexual abuse, mental illness, substance addiction, poverty and housing insecurity. For Aboriginal women, the legacy of colonisation − intergenerational trauma, cultural disruption and racism − entrenches disadvantage further.

Other factors behind the growing numbers include more recent legislative changes, implemented largely in response to violent male offending, that are proving to have a disproportionate impact on women. Over-policing of minor offences, restrictive bail and parole laws, abolition of suspended sentences, and introduction of mandatory sentencing in some contexts, are some of the factors associated with dramatic increases in women’s incarceration. 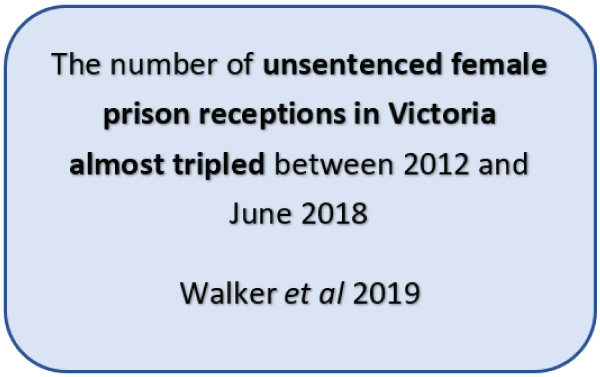 The following profile illustrates how these factors play out in the lives of incarcerated women. It is drawn from state and national criminological data in Australia, with a focus on Victorian data.

With an urgent need to manage infection rates in confined but highly fluid populations, Victoria should be taking steps to avoid prisons becoming vectors of infection.[2] Women prisoners, who rate more poorly than men on a range of health determinants, and cycle in and out of prisons at a faster rate than men, should therefore be a cohort of particular concern.

According to the Australian Institute of Health and Wellbeing (AIHW), 45% of women received into Australian jails have a chronic health condition, compared to 28% of male receptions. They are more likely to be smokers, to have a recent history of illicit drug use and to test positive to hepatitis C antibodies. Women prisoners have close to double the rate of mental illness as male prisoners and more likely to be on medication for a mental health condition.  Yet they are significantly less likely than male prisoners to have consulted a doctor in the previous 12 months, and, given they are in custody for shorter periods, to be able to access necessary treatment and support while in prison. What’s more, these physical and psychological health issues are likely to be linked to previous victimisation from an early age, commonly of family violence and sexual assault.

Aboriginal women enter prison with even more profound experiences of disadvantage and poor wellbeing than non-Aboriginal women.  They are more likely to have grown up in state care; to have experienced greater police involvement for low-level offending; to have entered the criminal justice system at an earlier age; and to have been the victim of more frequent and serious instances of family violence and sexual abuse.

The female prison population is also particularly fluid one, with the populations of women’s prisons more likely to be cycling in and out over short periods of time. Increasing numbers of women are held on remand, involving sentences of only a few months. When their matters are finally heard, many women are sentenced to ‘time served’, or receive no sentence at all, and when sentenced, are likely to serve short periods of detention of between one and five years. While not enough time to get help for the problems that brought them into contact with the justice system, these short periods of imprisonment are likely to result in women losing their job, housing and children, creating more problems down the track, rather than addressing them. 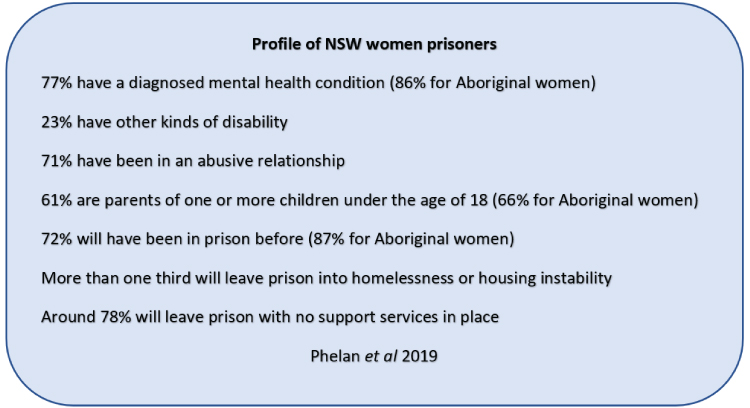 The bail or early release of women prisoners also poses less of a threat to public safety. Compared to men, women tend to be charged with relatively minor offences relating to property crime, assault or drug use. More recently, a woman held in a Victorian jail is increasingly likely to have been charged with breaching justice orders, such as bail, a community corrections order or a family violence intervention order (FVIO), with a recognised growth in the numbers of women being misidentified as predominant aggressors where they are in fact the victim-survivor of longstanding family violence.[3]

Where women are denied bail, increasingly this is not on the basis that they are a risk to the community, but because the women themselves are at risk, including in situations where they have no access to safe accommodation. Aside from an indictment on a community which substitutes custody for adequate social supports, this approach holds even less merit were an outbreak to occur in a custodial environment, leaving vulnerable women less, rather than more, safe.

The argument for alternatives to imprisonment

The continued detention of the vast majority of female prisoners in times of a public health crisis therefore cannot be justified on the grounds of wider community safety. However, the reasons for granting bail or early release for women prisoners in the face of COVID-19 form part of the wider argument for gender-specific, non-carceral approaches to women involved in the justice system.  The push to develop alternatives to prison that support women to address the circumstances that contribute to their offending is not new. The UK’s Corston Report of 2010 gave considerable impetus to the long-standing call in many countries for the ‘decarceration’ of women as part of a broader ‘justice reinvestment’ agenda.

In line with that agenda, it is essential that women eligible for bail or early release in the face of a public health crisis have supports in place to ensure they aren’t released back into homelessness, violent relationships or substance addiction. The measures required to protect both the health and human rights of prisoners and the safety of the general public, are discussed in Part 2.

Prison, like many parts of a justice system designed primarily to respond to male offending, carry too high a social and economic cost for women and their children. Providing alternatives to imprisonment for women, when done well, is a cost-effective reform that should make sound economic sense for governments facing serious financial constraints post pandemic.

[1] It is the combination of these factors that leads the Australian Institute of Health and Wellbeing (AIHW) to characterise the health of prisoners as a public health concern.

[2] It is for this reason that the Australian Institute of Health and Wellbeing (AIHW) characterises the health of prisoners as a public health concern.

[3] Research by Women’s Legal Service Victoria shows that women charged with FVIO breaches and family violence offences are statistically likely to be victim-survivors, not perpetrators, but have been incorrectly identified by police as the predominant aggressor.  See Ulbrik and Jago, 2018.

Australian Institute of Health and Welfare (2019), The health of Australia’s prisoners. Canberra: AIHW. 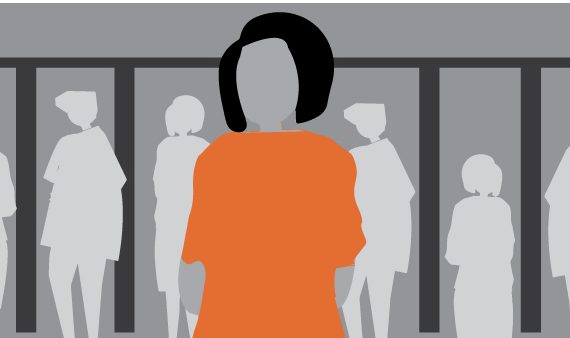 COVID-19 and incarcerated women: a call to action in two parts – Part Two

In this two-part series, we draw on our work with partner agencies and people with experiences of imprisonment to argue for women to be prioritised for bail or early release from Victorian jails. This is in advance of a broader CIJ Discussion Paper regarding the imperative for decarceration of women, to be released towards the middle of the year. In the second of this two-part discussion, the CIJ explores the impact on women of measures to manage viral infection in Victoria’s prisons. 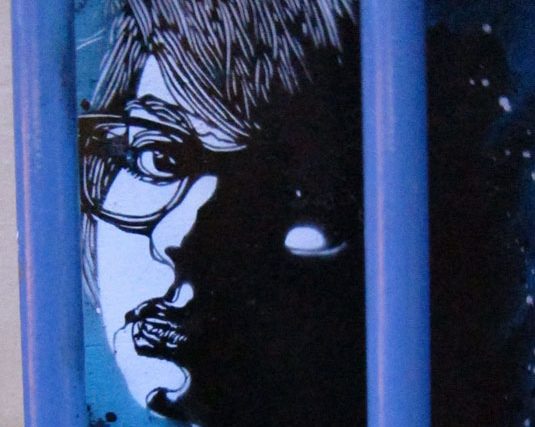 As part of our new research agenda on women's decarceration, the CIJ will conduct an evaluation of the Women Transforming Justice project. 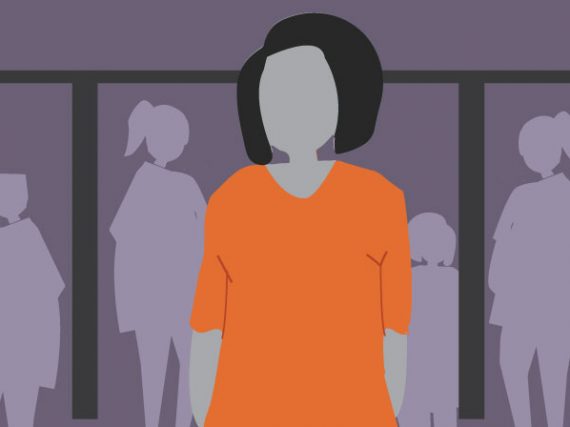 The CIJ is conducting an ongoing evaluation of Women Transforming Justice (WTJ), a collaboration between the Fitzroy Legal Service (incorporating Darebin Community Legal Centre), the Law and Advocacy Centre for Women (LACW) and Flat Out.